Astrophysicist on Supernovas, Teaching, and the Universe 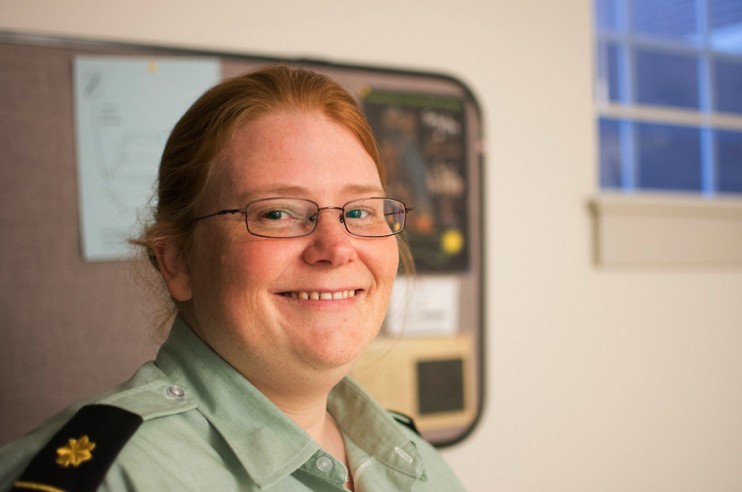 K. Tabetha Hole joined the Norwich physics faculty last fall as an assistant professor. The daughter of an American doctor, she was born in Nigeria and earned her PhD from the University of Wisconsin, Madison. Using computer models and Chandra X-Ray Telescope data, her ongoing research studies the structure of supernovas and massive star winds. This spring, she teaches Intro to Astronomy, the capstone Senior Seminar II, and an independent study while supervising a senior research project. In a recent interview, Hole reflected upon the beauty and mystery of the universe and teaching.

Dark matter is a name for our ignorance. If we look at the structure of galaxies, how fast the sun is going around the center of our galaxy should tell us how much mass there is in the galaxy. When we look at that, the amount of gravitational mass is way more than we can account for by actually looking at the stuff that’s there.

Ninety percent of the mass of the universe does not correspond to anything we know about on Earth. We’ve tried to account for it. But [we] just can’t. There’s missing mass. We know its effect. But we don’t know what it is, and that’s what we call “dark matter.” It’s “dark,” because it doesn’t glow. It doesn’t interact with light. It’s some completely different kind of matter that we’ve never been able to touch or detect directly. Obviously, we’ve been trying to. But we still don’t know what it is, and we’ve been looking for decades.

What do you call yourself?

Astronomer, astrophysicist, and, of course, physics professor. I spend most of my time being a physics professor. It is my focus, because I really enjoy teaching. Generating new knowledge is wonderful. But as is true in pretty much every academic discipline, if I discover something new about stars, only a few people in the world will ever read about that. Whereas, working with students, teaching introductory physics, I am able to share with them something beautiful and amazing about the universe.

You published a research paper titled, “Can We Detect Clumpiness in Supernova Ejecta?” Well, can we?

Why should we care about supernovas?

When a star explodes, it turns out that that explosion makes most of the heavier elements in the universe. The iron in your blood had to be made in a supernova—there’s no other way to make iron—and probably more than one. So the iron in your blood came from multiple stars exploding. We can see supernovas across the universe. They affect the stars around them. They start star formation. They end star formation. They are responsible for changing the chemical makeup of the universe over time. They are responsible for making us. They are a test for our understanding of physics in extreme conditions that we just can’t do on Earth. If you want to study how the universe changes over billions of years or how galaxies change, you have to understand what happens in [supernovas].

Does your brain ever hurt thinking about these things?

Not so much. I think maybe the bigger puzzle is how to get students to understand. Because especially in physics, you first have to remove the misconception and then you can bring in the real fun. And that’s something no one knows how to do perfectly. I mean people ask, If we can put a man on the moon, why can’t we feed the hungry? The reason we can’t is because of people. We can harness the power of a couple thousand people who want to work together to go to the moon. [But] you can’t put people in a box and poke them until they do what you want. All in all, I would definitely rather feed the hungry. Humans in some ways are a much harder puzzle than the universe. Helping people learn more about themselves and learn more about the world, that is actually in some ways a bigger challenge.

You say your interest in physics was sparked, in part, while studying astronomy in high school. You mention things like studying the phases of the moon. The moment when you visualized that relationship from space, rather than the surface of the Earth, and how that suddenly provided clarity. Can you talk about that?

By changing your perspective, something that was incredibly complicated becomes incredibly simple and elegant. That’s a larger part of what I find so amazing about the universe. You take things that are on surface incredibly complicated and you peel back the layers to find the incredibly simple rules that the universe operates by. Then you can build back up to the complication, piece by piece, and understand each one. And then the universe is not this weird unpredictable mess. It’s actually beautiful and elegant underneath, even if it’s not what we would ever have expected.

What excites you about the field today?

Oh, there’s so much. One big [thing] is that we now have a new way of looking at the universe: gravitational waves. It’s like opening your eyes. When we’re in astronomy, all we can do is study what the universe sends us. Most of the information it sends us is in light, radio waves, x-rays. Gravity comes from mass. So we now have a tool for looking at things that don’t even necessarily produce light. It’s going to give us more information that we could’ve gotten in the next hundred years using regular telescopes. So that is the most exciting thing right now. That we have a fundamental new way of knowing about the universe.