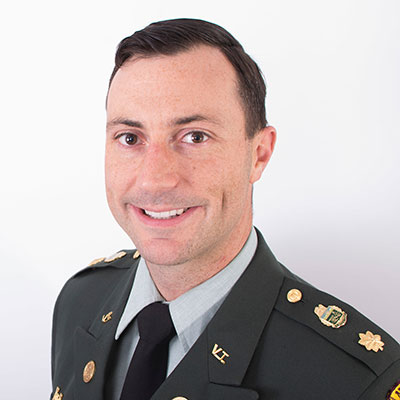 After earning a Master of Science in mechanical engineering from Stanford University in 2005, Maj. Bradke enlisted in the New York Air National Guard, earning a commission from the Academy of Military Science, McGhee-Tyson ANGB, Tenn. He was distinguished as class Honor Graduate, ranking number 1 of 102 officer candidates. Upon completion of his undergraduate pilot training at Columbus AFB, MS, Maj. Bradke was presented T-37 and T-38 Top Gun awards as well as the Air Force Association Award. He next attended the initial F-16 replacement training course with the 61st Fighter Squadron Top Dogs, 56th Fighter Wing, Luke AFB, Ariz., where he was recognized as the Red River Valley Top Wingman.

In 2009, Maj. Bradke began his doctoral candidacy at Rensselaer Polytechnic Institute in Troy, N.Y. and was reassigned to the 119th Fighter Squadron “Jersey Devils,” 177th Fighter Wing in Atlantic City, N.J. While working part-time on his degree, Maj. Bradke was deployed to Balad AB, Iraq, in support of Operation: Iraqi Freedom and Bagram AB, Afghanistan in support of Operation: Enduring Freedom.

From 2013-14, Maj. Bradke worked at the U.S. Naval Test and Evaluation Center, Naval Air Station Patuxent River, Md., as an advanced systems engineer, developing the next evolution of tactical capabilities for the Joint Strike Fighter and F/A-18 programs. In 2014, he successfully defended his dissertation, earning a PhD in biomedical engineering.

Bradke accepted a faculty position in the Department of Mechanical Engineering at Norwich University in 2014. As an assistant professor, Bradke teaches undergraduate classes in mechanical engineering. His research interests span both medical and engineering disciplines, working to enhance efficacy and survivability of pilots, passengers and crewmembers during high-performance flight. He holds the aeronautical rating of “Instructor Pilot” with over 1,300 flying hours in F-16C/D, AT-38C, T-38C, T-37B, PA-28, C-172 and C-182 aircraft. Prof. Bradke has authored over a dozen papers and technical manuals and has consulted on the development of combat aircraft, unmanned vehicles, and commercial spacecraft. In 2016 Bradke was rated as a “highly aualified” astronaut candidate and invited to interview for NASA’s 22nd astronaut class (Top 0.5% of 18,000 applicants).

Contact Info
Bartoletto Hall U142
1 (802) 485-2631
This email address is being protected from spambots. You need JavaScript enabled to view it.