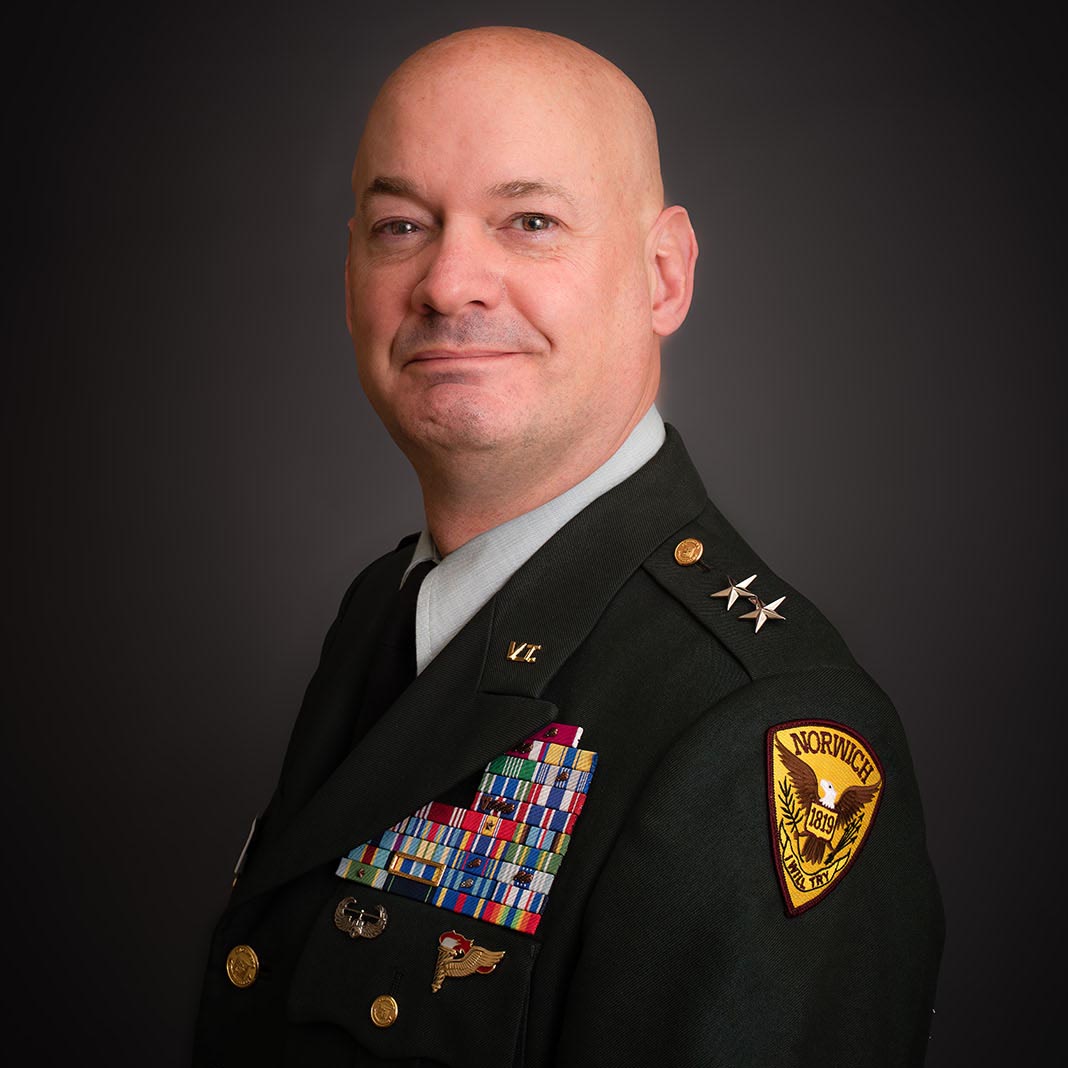 Dr. Anarumo assumed the presidency amidst the COVID-19 global pandemic and led the university successfully through a year of full, yet modified, campus operations including academics, athletics, and student life. His empathic leadership demonstrated in such challenging times attracted national news media coverage highlighting his proactive, transparent, and frequent communications that emphasized student mental health and the well-being of the university and central Vermont communities.

As president, Dr. Anarumo prioritizes building academically, experientially, and organizationally upon Norwich University’s 200-year-plus legacy, with special attention to a tradition of innovation. At Norwich, he applies three decades of leadership experience to propel modernization and fiscal responsibility. He brings many years of documented high performance in the military and as a faculty member with several elite civilian colleges and universities, combined with diverse domestic and international networks and affiliations. He has a proven track record of success in securing traditional and nontraditional revenue streams and building world-class faculty development and student leadership programs.

At Norwich, Dr. Anarumo oversees approximately 2,400 campus-based students in 35 majors and one graduate degree in architecture; along with more than 1,500 students in 15 online master’s degree programs, nine bachelor’s degree completion programs, six graduate certificate programs, and Norwich Pro℠, which offers online professional development courses and certificates in high-demand skill sets. The Norwich family includes more than 22,000 living alumni and over 860 employees, about 160 of whom are full-time faculty members.

Dr. Anarumo leads a university with an annual operating budget of over $102 million and an endowment of $310 million as of April 2021. Norwich University’s Northfield, Vermont, campus boasts 1,229 total acres, along with an additional instructional site in Denver and an international study abroad program in Berlin, Germany. Dr. Anarumo also oversees research centers on topics such as cybersecurity and digital forensics; peace and war; and global resilience and security.

The Road to Vermont: From New Jersey via the Globe

Dr. Anarumo’s previous position was Director and Permanent Professor for the Center for Character and Leadership Development, U.S. Air Force Academy, Colorado. In this capacity, he oversaw delivery of leadership and character education programs to a Cadet Wing of more than 4,000 officer candidates; advised honor education programs and execution of the Cadet Honor Code; hosted several large forums per year, including the annual National Character and Leadership Symposium; and conducted leading-edge research, instruction, and assessment for advancing the 21st century Profession of Arms.

Before accepting his Air Force Academy professorship, then-Colonel Anarumo was Vice Commander of the 39th Air Base Wing at Incirlik Air Base, Turkey, where he was responsible for approximately 5,000 U.S. military, civilian, and contractor personnel and the combat readiness of U.S. Air Force units at Incirlik and four geographically separated units in Turkey.  He has also lived and worked extensively overseas in Iraq, Afghanistan, Saudi Arabia, Kuwait, Kyrgyzstan, and Korea.

He enlisted in the U.S. Army in 1987, completed his Bachelor of Science degree via the GI Bill, then spent 26 years as an Air Force officer. He entered the Air Force in 1994 as the Distinguished Graduate of Air Force Reserve Officers’ Training Corps (ROTC) Detachment 485, Rutgers and Princeton Universities. He later earned a Master of Arts in Criminal Justice in 1999 and a Doctorate in 2005, both from Rutgers University. He also completed a postdoctoral fellowship through the National Security Fellow Program at Harvard University’s John F. Kennedy School of Government in 2012.

He lives in Woodbury Hall in Northfield with his family and dogs.

November 1987
Enlisted in US Army as a M1 Abrams Armor Crewman.

May 1994
Bachelor of Science in Administration of Justice, Honors College, Rutgers University.

May 1999
Master of Arts, School of Criminal Justice, Rutgers University.

September 2003-May 2005
Research Associate, Center for the Study of Public Security, Rutgers University.

Latest from the President

Office of the President